Counselling and Coaching for Women

Email to set up a call  lyn@lynfirthcounselling.ca

Sarah 51, Was Holding Herself Back in Her Career

Sarah had a fulfilling and successful career as a middle manager doing what she loved. However, she could not understand why she was continually overlooked for more senior positions within her company.

She had more tenure, skill and ability than a few of the men who surpassed her. She felt that they had walked all over her to get the more senior positions. She felt resentful, hurt, full of self-doubt and angry.  She did not know what she was doing wrong.

She came for counselling because she was torn between staying with the company and leaving, and wanted help to make the decision.

Sarah was responsible for the outcome of many successful projects. I soon noticed that she insisted that any recognition she received from her employer was as a result of her team’s or specific team member’s efforts, not her own. Recognition and reward then went to others, at her own expense.

To keep the spotlight off herself, she became highly skilled as a support player. She kept quiet when others took credit for and received recognition for her work. She thought what she had to say was not important and was afraid to take the risks to be seen in a strong way. When she did speak up it was in a passive or apologetic way and her opinion was often not heard.

Sarah did not want to rock the boat.

She continually told herself she was happy to play the supportive role helping others achieve success.

We discovered that as a child she was taught that “good girls” are seen and not heard. Their role was to make others happy, and that it was not appropriate or ladylike to compete with men. Her good girl messages kept her in a supportive role throughout her working life and held her back from advancing into the senior leadership role that she secretly longed to be in.

Sarah realized that she was tired of taking the back seat, but the fear of failure and rejection still stopped her from stepping out of her own shadow.

Eventually, she realized she was the only one holding her back from the leadership position she wants. 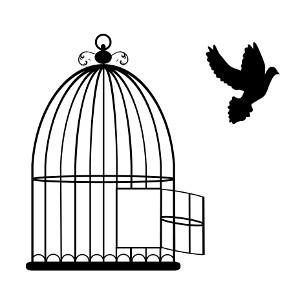 Our work together showed her how to speak up and be seen as the strong and effective leader she knew she was inside. She began with one small step, giving herself permission to be seen and heard.  When she stood up in a large staff meeting to give a report she noticed the usual fear was more subtle, giving her a new level of confidence.

Sarah stayed in her job and no longer feels like a small fish in a big pond. She feels that her perception has shifted and she is more comfortable standing up to the men she would normally be supporting..

After some adjustment period Sarah reported that she had gained the recognition and respect that she deserves and is currently vying for a more senior position.

I encounter scenarios similar to those above every day. I welcome women with these and/or other kinds of concerns and help them to discover positive solutions.

If you resonate with some of these stories and want to overcome the behaviours that are holding you back, contact me to book an appointment.

"I first met Lyn when I was dealing with yet another unsuccessful relationship. I wasn’t happy and didn’t know how to be myself in a relationship but stayed because I was terrified of being alone. I thought if I tried harder to do and be what my partner wanted, I could get the relationship back on track. I felt so lost and confused about why I couldn’t make it work. When I started counselling I began to see the should messages that kept me focusing on fulfilling others needs to find love and acceptance for myself.  "Don’t be selfish, think about other people instead of yourself" What a relief to learn that messages like this have been my driving force all this time! Lyn stuck with me while I discovered my own needs and myself and I feel so much happier. I discovered how to get past my need for approval from my partner to be who I am. I am better at showing up as myself in my relationship. I am experimenting with new hobbies, taking different classes at night school just for the fun of it, and feel good about myself for the first time. Life feels more risky and exciting at the same time. I have a much healthier relationship with myself and my relationship feels easier these days. I am grateful to Lyn for helping me to take back my life."

“When I first came to see Lyn for therapy I was exhausted and terribly unhappy with what had become a series of dead-end jobs and dead-end relationships. Nothing seemed to make me feel happy for long so I would leave my job or relationship looking for the next thing to make me feel better. With each new job or relationship, I lost a bit of myself and I felt empty and didn’t know who I was anymore. I didn’t know what else to do and was afraid I would always be unhappy. I had never heard of the ‘shoulds’ before I met Lyn and I can't tell you how much my struggles to be happy throughout my life started to make sense after learning about it. I stopped waiting and hoping that my next job or partner would make me happy and learned what to do to make myself happy. I feel more like myself now and more in control of my life. My only regret is that I did not learn about the ‘shoulds’ earlier. I have a job I actually enjoy and my partner is off the hook for being responsible for my happiness. I am happier and loving it!”

Sign up for my newsletter and receive my
free e-booklet: 7 Tools to help you break free
from the 'Shoulds' and the 'Sure signs that
I’m ready for Counselling' guide.